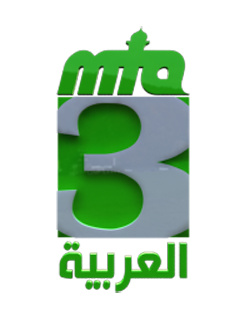 MTA 3 Al Arabiya  It was launched on 23 March 2007. The programmes are broadcast throughout the Middle East North Africa[1] and North America.
It is also available for live streaming via the Internet from the channel offeciel site. The channel covers a wide range of religious matters, particularly those concerning Islam and presents the Ahmadiyya stance to certain issues. MTA 3 is run and voluntarily funded by Ahmadis.
MTA 3 Al Arabiyah channel can be watched via satellite Hot Bird 13E 13.0E by following those steps:

The MTA 3 Al Arabiyah Television Station Frequency has last time Updated on March 25, 2016
follow and enjoy The Channel where ever you are in Europe, North Africa, Asia and in all countries that Hot Bird 13E covered just using the antenna dish with the parameters explained in the : Hot Bird 13E coverage map.